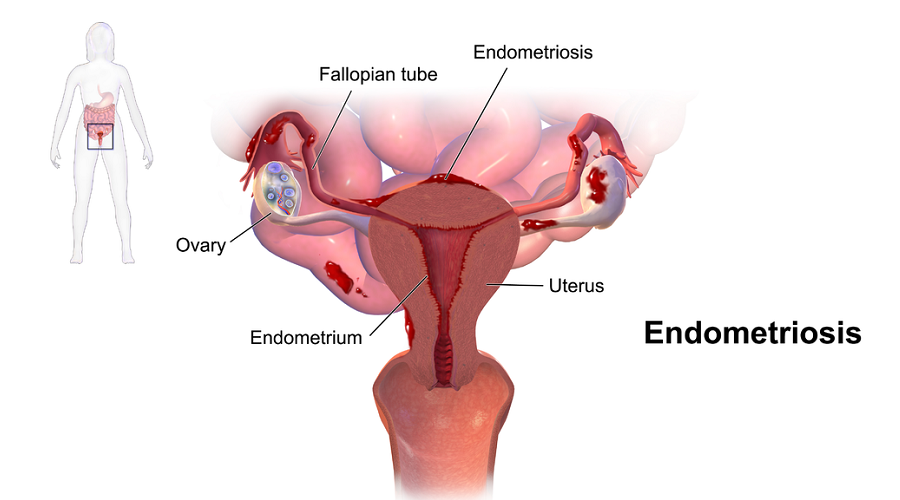 Endometriosis (en-doe-me-tree-O-sis) is an often painful disorder in which tissue that normally lines the inside of your uterus — the endometrium — grows outside your uterus. Endometriosis most commonly involves your ovaries, fallopian tubes and the tissue lining your pelvis. Rarely, endometrial tissue may spread beyond pelvic organs.

With endometriosis, displaced endometrial tissue continues to act as it normally would — it thickens, breaks down and bleeds with each menstrual cycle. Because this displaced tissue has no way to exit your body, it becomes trapped. When endometriosis involves the ovaries, cysts called endometriomas may form. Surrounding tissue can become irritated, eventually developing scar tissue and adhesions — abnormal bands of fibrous tissue that can cause pelvic tissues and organs to stick to each other.

Endometriosis can cause pain — sometimes severe — especially during your period. Fertility problems also may develop. Fortunately, effective treatments are available.

Common signs and symptoms of endometriosis may include:

The severity of your pain isn't necessarily a reliable indicator of the extent of the condition. Some women with mild endometriosis have intense pain, while others with advanced endometriosis may have little pain or even no pain at all.

Endometriosis is sometimes mistaken for other conditions that can cause pelvic pain, such as pelvic inflammatory disease (PID) or ovarian cysts. It may be confused with irritable bowel syndrome (IBS), a condition that causes bouts of diarrhea, constipation and abdominal cramping. IBS can accompany endometriosis, which can complicate the diagnosis.

Although the exact cause of endometriosis is not certain, possible explanations include:

Several factors place you at greater risk of developing endometriosis, such as:

Endometriosis usually develops several years after the onset of menstruation (menarche). Signs and symptoms of endometriosis end temporarily with pregnancy and end permanently with menopause unless you're taking estrogen.